Well, that just about sees off another year and it seems only fair to pause and take it all in bearing in mind how twelve more months passed in a blur of mischief and mayhem at 100 miles an hour……just the way I like it.

Well it all began with the release of ‘Not On Our Watch‘, my 16th album and a record I remain phenomenally proud of; but in January something rather unexpected happened.

During a couple of weeks R&R I’d read Brian W. Lavery‘s incredible book ‘The Headscarf Revolutionaries’, telling the story of the Hull’s Triple Trawler Tragedy and the subsequent grassroots campaign by a group of amazing women to improve safety aboard ship. I wrote the first song on February 21st and recorded the last one on March 22nd, and the album ‘Headscarves & Hurricanes’ was born. Course, it needed a few embellishments from Rebekah Findlay‘s amazing violin and a fantastic night in Leeds with Commoners Choir, but in essence it was done and the year was off to a cracking start. 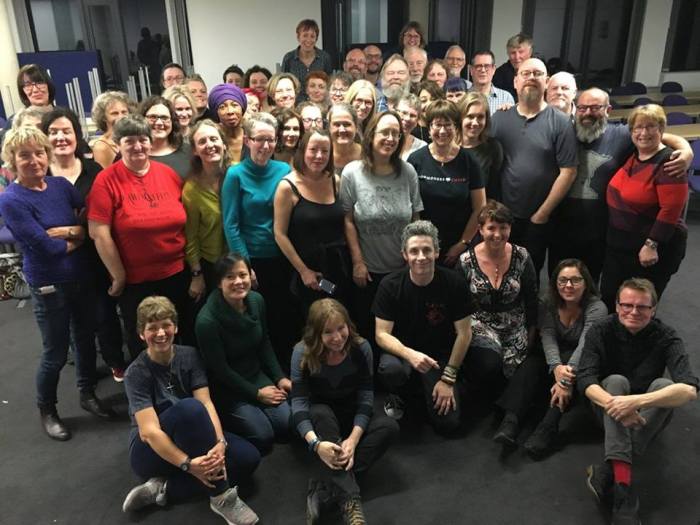 The gigs came thick and fast and I sang everywhere from picket lines to Children’s Wards; for everything from strike funds to food banks and back again; and the madness hit: Hull, Manchester, Stockton-on-Tees, Ashton-under-Lyne, Market Weighton, Hartlepool, Leeds, Scarborough, Wigan, Croxton Kerrial, Rotherham, Filey, Barnsley, Dublin, Durham, Bolton, Wakefield, Oldham, Warrington,  Glastonwick, Doncaster, Mansfield, Southport, Bradford, Goathland, Glasgow, Llangollen, Huddersfield, Whitwell, Edinburgh, Nottingham, Chesterfield, Darlington, Cleethorpes, Skegness, Liverpool, Warsop, Stainforth, Glossop, Ulverston, Middlesbrough, Harrogate, Stourbridge, Grimsby and Scunthorpe…..many of them more than once…..and en route I had the time of my life. Highlights everywhere and too many to mention so here’s a few pics to sum it all up. 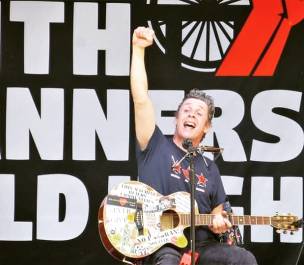 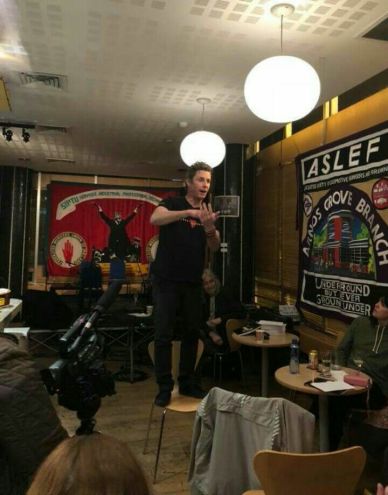 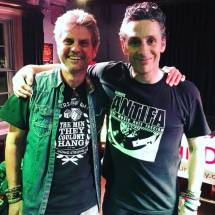 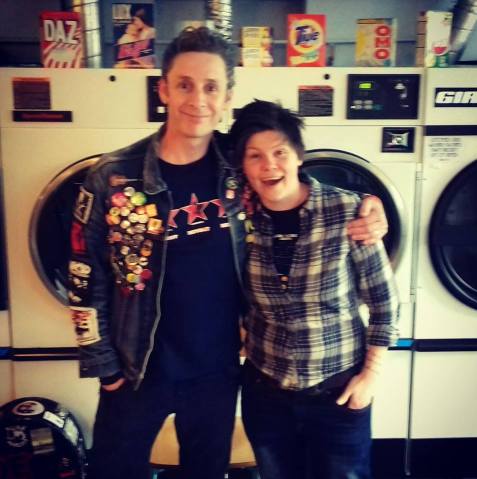 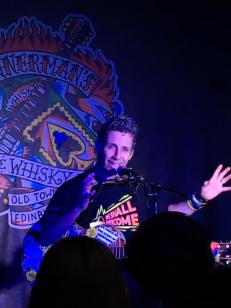 The third May Day Festival Of Solidarity was probably our best yet. Tony Wright and I had put together what we felt was a classic line-up, and the roof came off Old Schoolhouse in Barnsley so many times that weekend it was genuinely hard to keep up. Superb performances from all, but there were moments that brought tears to my eyes and tingles up my spine that I will remember forever. Again, the pics tell the story, but it was IMMENSE. 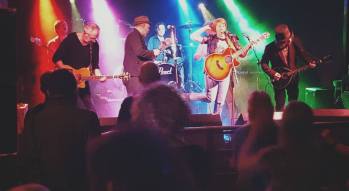 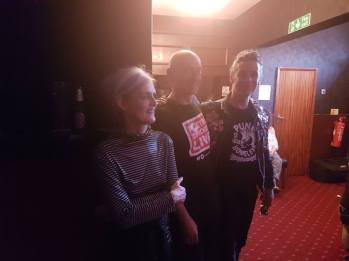 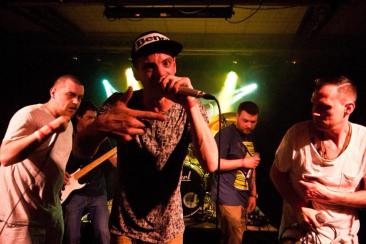 Everywhere I went I met amazing people giving their all for live music and for the cause of humanity, and that is the best thing about being out there on the road, the politics isn’t an abstract concept because you see it in action, you see how much people give for others, you see socialism in action away from the books, away from the dry text and the arguments over the small-print- you see real people helping real people through real troubles and it inspires in a way that nothing else can.

Whether that was an unbelieveable night at Stainforth Pit Club opening for Paul Heaton and Jacqui Abbott…. 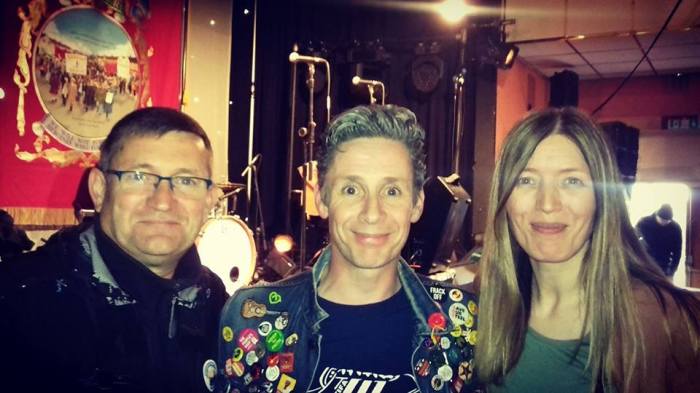 Or on the ‘Armistice Tour’ alongside the truly amazing Rebekah Findlay…

Be that in Edinburgh… 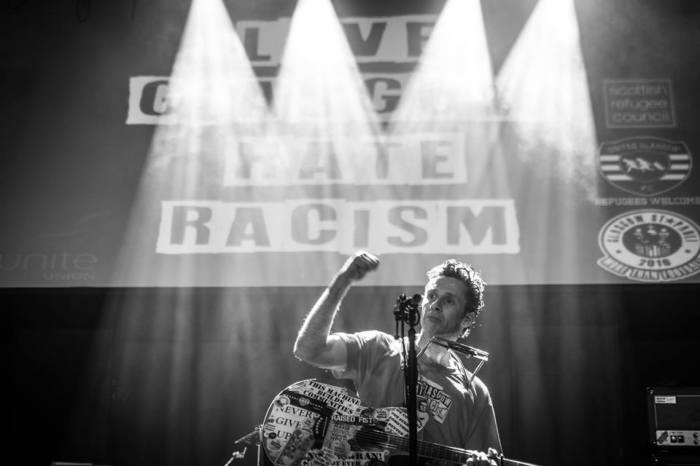 You see it, you feel it, and you know it because it’s there beating in your chest and in the hearts of thousands of others. I love that. I never tire of it. Whether the gig is to 6 people or 600, the message is the same. The future needs us, and we’re good for it.

So from the handful of FCC workers whose strike won sick pay for 3000 people up and down the land….. 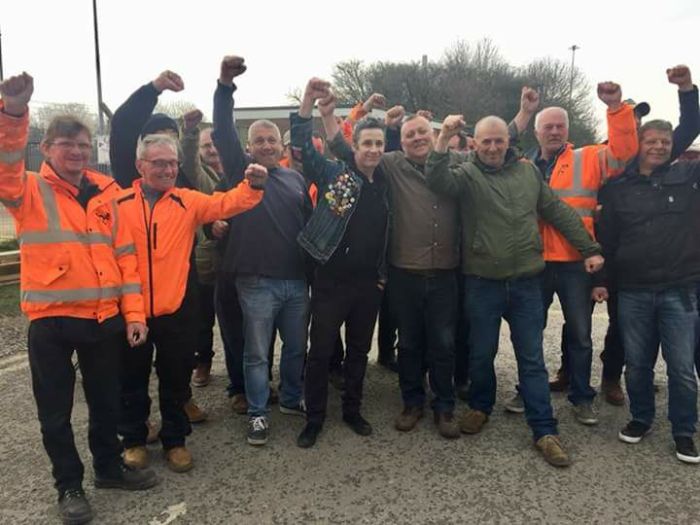 There is hope out there if you know where to look.

The trick is to never stop looking.

In June I FINALLY got that selfie with Mr Corbyn when I sang at the BFAWU Conference in Southport. It was a something of a rushed meeting, but I know he is 100% behind the work we are doing with We Shall Overcome which hit its fourth year in #WSO2018, and with Universal Credit being rolled out into more and more areas, causing poverty like never before wherever it lands, our amazing family of artists, organisers and activists were needed more than ever before…..and boy did they respond. 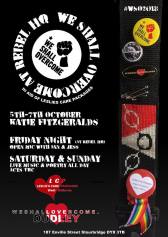 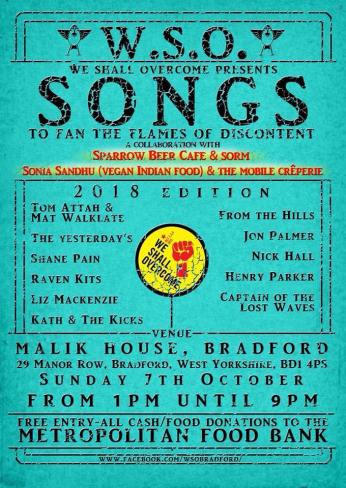 We added 208 more events to our grand total which will top the 1000 mark by the middle of 2019, and our best estimates tell us the help we will have raised for those at the sharp end of austerity will be close to half a million quids worth of food, cash, clothing, bedding, furniture, electrical goods, sleeping bags and tents; and on top of all that, Pauline Town‘s incredible work over in Ashton-under-Lyne has secured hundreds of people a future off the streets and into places of their own where they can dream of a fresh start. The hope this brings is immeasurable. Pauline is an absolute mountain of a woman and was rightly presented with a community award for her incredible achievements earlier this month.

Speaking of awards. September was quite a month.

I became the first non-famous person to be presented with the Gerrard Winstanley Gold Spade Award for Contributions to Socialism. The only other winners have been Tony Benn, Maxine Peake, Jimmy McGovern and Ken Loach; so when I was handed this amazing plaque by my good friend and comrade Attila the Stockbroker at Wigan Diggers Festival, it was a truly magical moment. 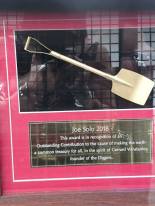 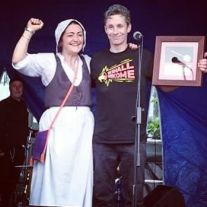 But perhaps the moment that best summed up my year, and the amazing people who have made it so special, came earlier that day when I took to the stage amid driving rain and looked out on to an empty square as the crowds huddled in the beer tents for shelter. Thinking it was going to be a tough gig playing to an empty space, I set myself up and heard the introduction so I looked up, and there before me was a square full of people braving the weather to watch the show……and we made the rain stop!!

So that was the year that was. I have been tremendously lucky to have been the places I have been and met the people I have met. I know that. Stuff like this doesn’t happen to everyone, and it’s important to recognise that, to love every moment, and to appreciate the good fortune that brings stuff my way.

A massive thank you to everyone who supported both me and WSO throughout the year, either by coming to the gigs, buying the music, sharing the posts, making the posters, running the shows, snapping the pics…..or in the case of the amazing Sean Mcgowan at the RMT, making me cry by handing me a birthday cake and award. 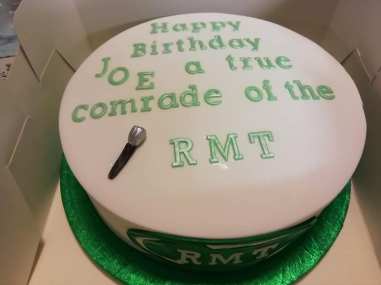 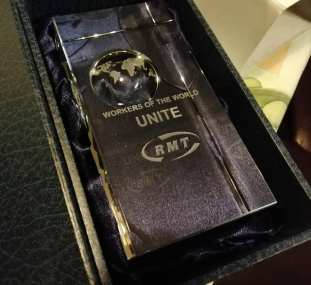 I vow to fight on in 2019 and do everything in my power to live up to my promises, to fight the good fight harder than ever, and to be there for as many people as the road permits me.

We start with two new records….

a brand new May Day Festival of Solidarity.….

And more love and enthusiasm than ever.

Not bad foundations on which to build.