So that was 2019, a year that brought hope and heartbreak, dreams, doubts and disappointment, and yet leaves us with a sense that something HAS to change for the better and soon. I was always told that light shines brightest in the darkest places, so we take that light where we can find it and, as a new year beckons, we fight on.

For me 2019 started in the Trades Club, Rotherham and ended in All Hallows Church, Leeds eleven months and two days later. En route the madness and the mayhem landed in Nottingham, Hull, London, Ashton-under-Lyne, Crewe, York, Doncaster, Walthamstow, Bishop Auckland, Wakefield, Stoke, Burnley, Wrexham, Medway, Durham, Saltburn, Scunthorpe, Hartlepool, Sheffield, Barnsley, Hebden Bridge, Redcar, Oldham, Stockton-on-Tees, Manchester, Dewsbury, Liverpool, Tolpuddle, Widnes, Glasgow, Bradford, Wigan, Goole, Brighton, Stainforth, Darlington, Whitby, Pickering, Middlesbrough and Haxey…..some of them multiple times…..and I crawled home mid-December absolutely shattered; but every single mile was worth it for the singing and shouting, the smiles and the solidarity. We did good out there in testing times, and I can’t wait to get back on the road in January. 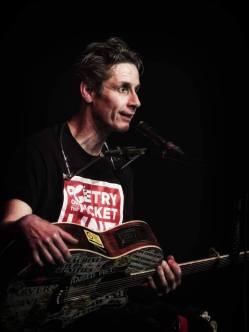 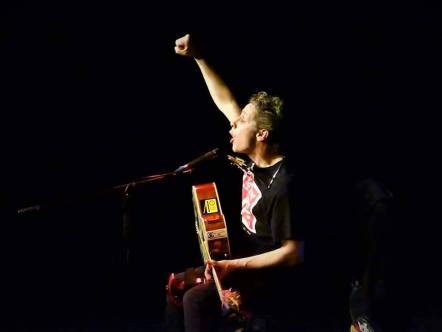 Highlights have to include my first ever sold-out headline show in London at Greenwich Theatre back in February; the album launch for ‘Headscarves & Hurricanes’ at The Station Hotel, Ashton-under-Lyne; unveiling the the new memorial to Hull’s International Brigade volunteers….. 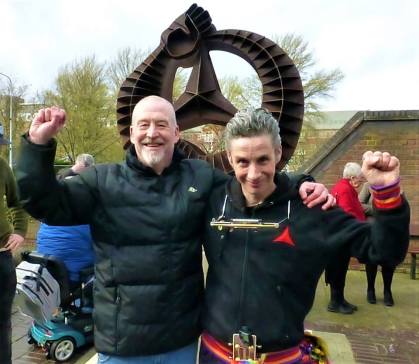 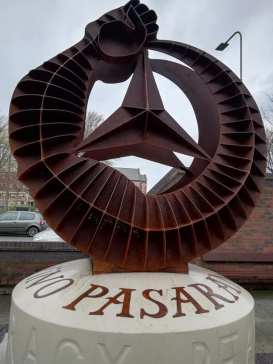 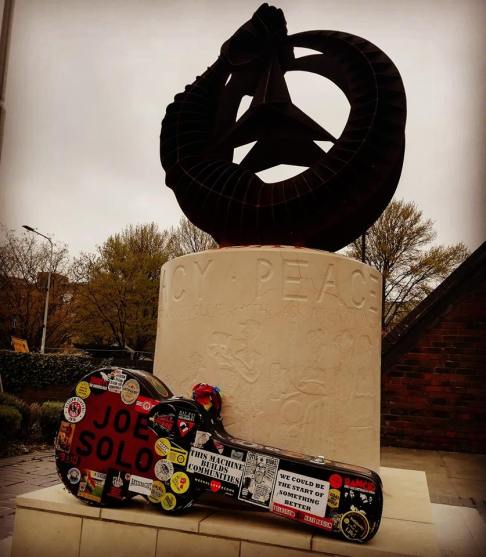 opening for the peerless Grace Petrie in a packed Old Cinema Launderette in Durham….. 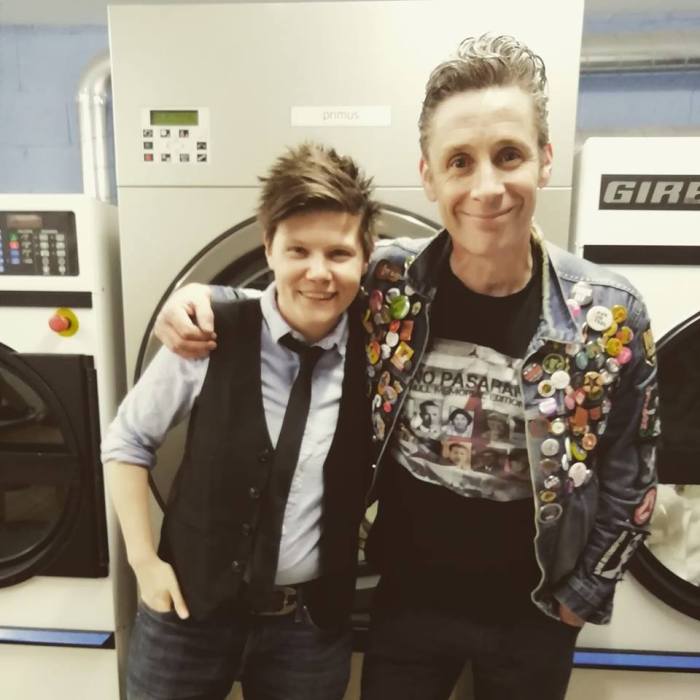 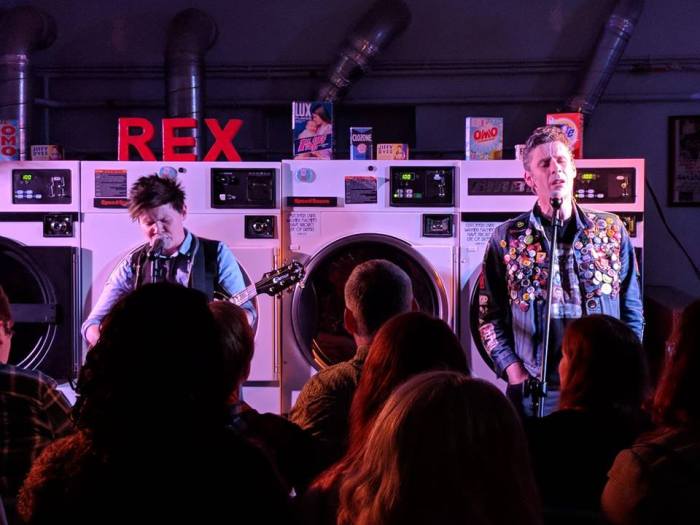 ……our best May Day Festival Of Solidarity yet, where I sang for the first time live with Commoners Choir, a sound that will stay with me forever…. 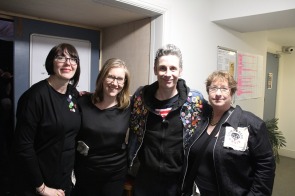 ….‘With Banners Held High’ where I got to recite my custom-written poem to kick the whole thing off, and sing with the Commoners AGAIN!

…..singing ‘Headscarves & Hurricanes’ right in the heart of the Hessle Road community whose stories the record tells was truly spine-tingling….

And the whole gig was captured on camera here:

……Durham Miners Gala with the Hatfield Brigade is ALWAYS a day to remember, especially when you’re given the honour of pole duty (the left one, obviously hehe)… 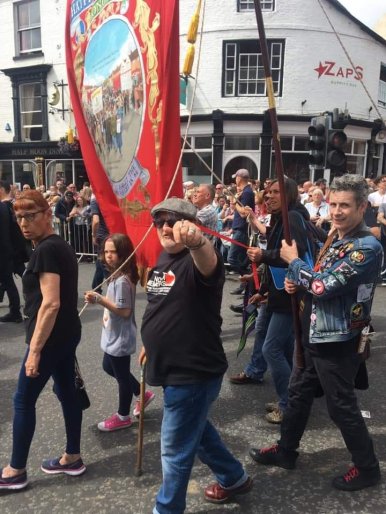 There was the truly FANTASTIC Tolpuddle Martyrs Festival….

….where I shared a stage with Naomi Bedford and Paul Simmonds on top of delivering mischief as per; there was the utterly brilliant Love Glasgow, Hate Racism event sharing a bill with my comrades and friends The Wakes among many others, and meeting the legendary Skids-frontman Richard Jobson… 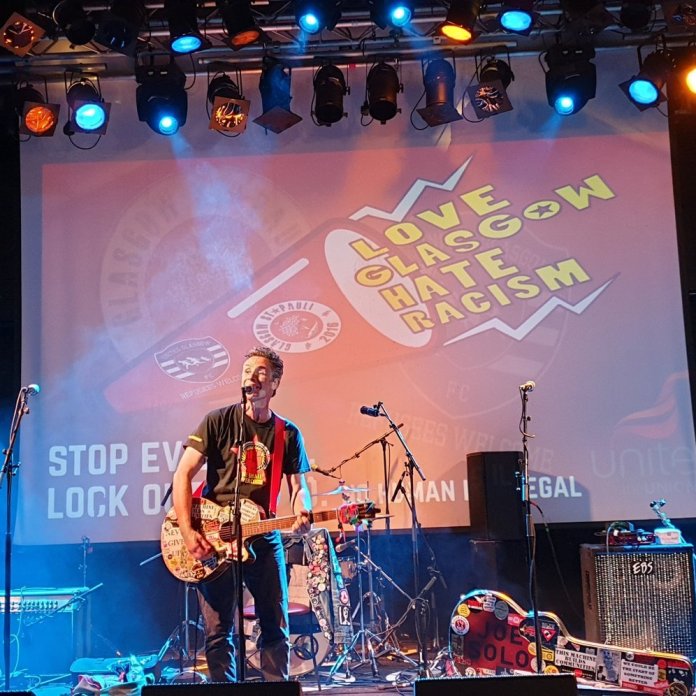 …..the Peterloo March to commemorate the 200th Anniversary of the massacre in St Peter’s Field 16th August 1819…. 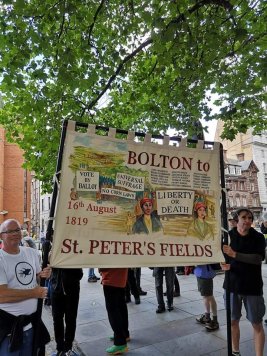 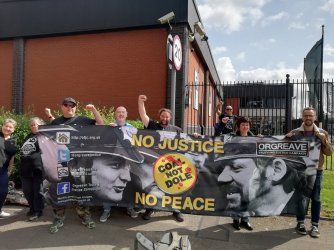 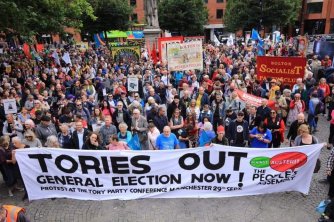 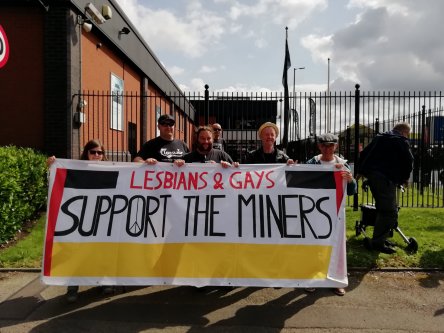 An unforgettable Wigan Diggers Festival where I not only got to hand the Gerrard Winstanley Gold Spade Award to the wonderful Pauline Town, but I got to sing with first Darren Poyzer, and then my boyhood heroes The Men They Couldn’t Hang!!! 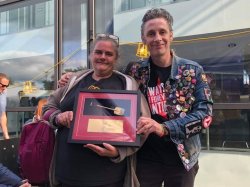 A truly incredible afternoon at Musicport Festival in Whitby, sharing a stage with Rebekah Findlay and Commoners Choir on a very packed North Sea Stage….

…..and, after thousands of miles for We Shall Overcome, hundreds more for the Labour Party, Xmas hospital singalongs, and just about every other form of mischief that could be conjured, the gigging year ended with a sold-out WSO show in Leeds. 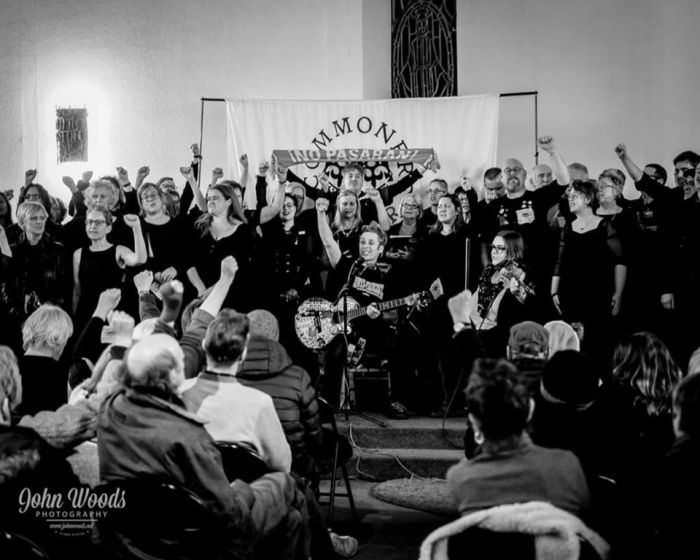 In between, I managed to record Commoners Choir, Rebekah Findlay, The Hatfield Brigade, and a special Hull Relatives Solidarity Choir for new releases; raise £1200 for Refugees putting my running shoes on for the British Red Cross…. 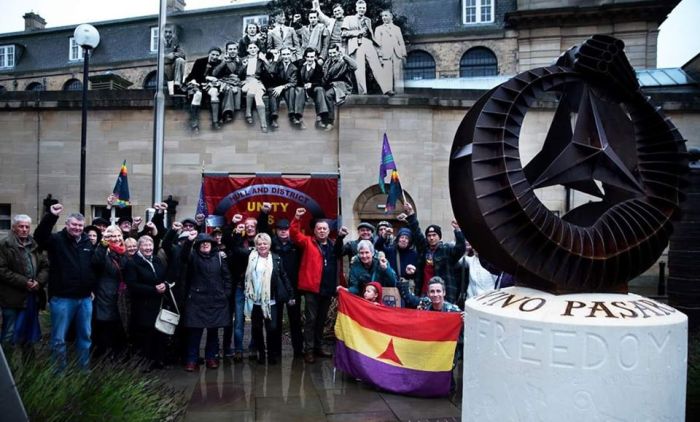 ……oh and reform Lithium Joe for two VERY special gigs which raised £1800 for Greater Manchester’s homeless and Hull Help For Refugees at a packed Station in Ashton for my 50th birthday We Shall Overcome all-dayer; and a sold-out Adelphi in Hull the night after….. 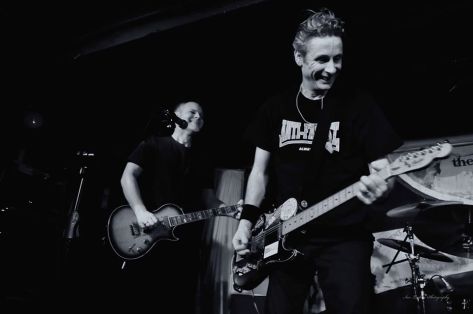 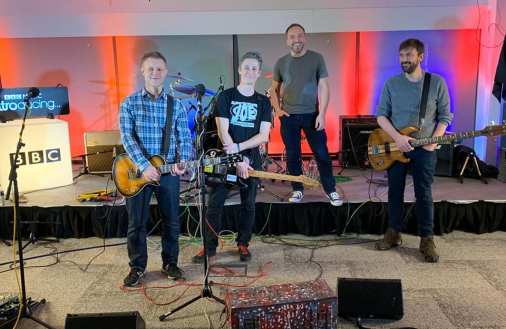 So small wonder then that I’m a little bit knackered right now.

Though not knackered enough to not pen a brand new 4-track EP called ‘Keep On Fighting’ to put the wind back in a few sagging sails as we steel ourselves to fight all over again. That, plus a brand new single from Lithium Joe, a re-issue of ‘No Pasaran’ with bonus tracks, and the imminent ‘We Shall Overcome EP’ of protest covers will form the basis of what I’m up to in 2020. 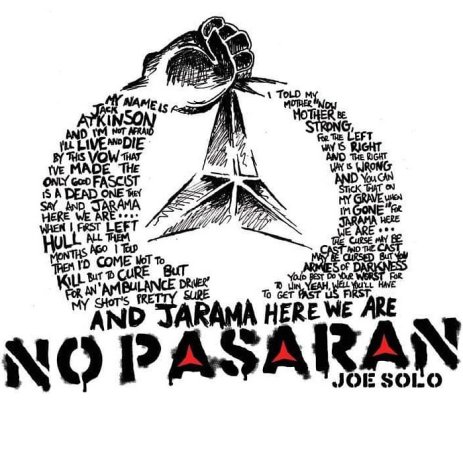 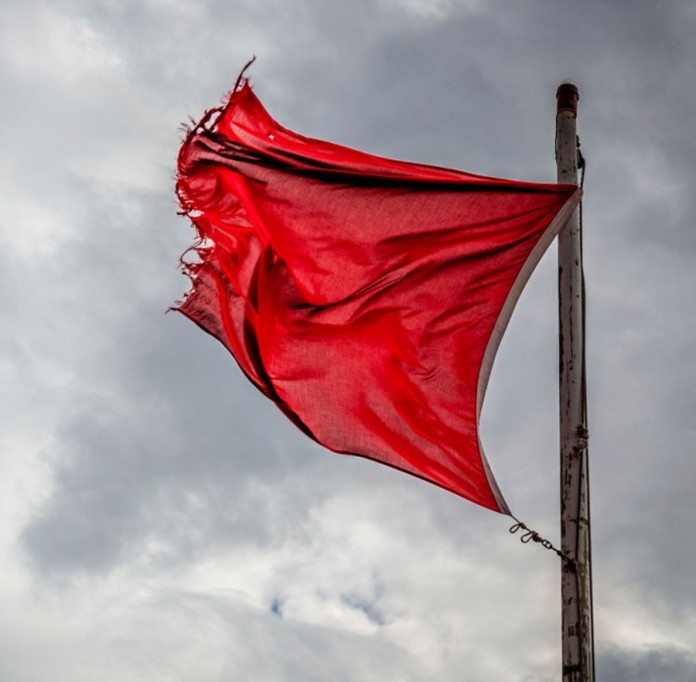 And read about the new ‘Not On Our Watch Campaign’ elsewhere on this site. That will be used to help anyone running out of money before a pay day or benefit payment to stop them having to turn off the heating or go without food.

And so a MASSIVE thank you to all of you who supported me through thick and thin; who marched at my side, who sang along, who shouted and hollered and laughed and cried; who kept me going when I needed coffee or a hug; who bought the CDs and the t-shirts and the downloads to keep the appeals going, making sure we did everything we could to feed and clothe and house folks who needed us in their darkest hour of need; and of course, to all you amazing people who book me to play and keep me out there doing what I do best.

Special mentions to my comrade-in-crayons Kevin Pearson for his unflinching support; Tony Wright for being my brother in arms; to Paul and Lindsay Rutland for being my road buddies over more miles than are healthy; Chip Hamer and all at Poetry On The Picket Line, for showing street-level solidarity to the world and being there when I’m miles away from home; to Dave, Big E and Aidy for making a 25 year old racket fresher and more fun than ever; Dave Griffiths for getting me electric again; Pete Yen without whom We Shall Overcome would have withered and died; and of course to Pauline Town, a daily inspiration when the world gets on top of me.

Loads more people keep my show on the road, and I love you all to bits.

Right now, 2020 beckons. No idea where it will take me. I just can’t plan that far ahead.

But I promise you this, I will fight harder than ever. 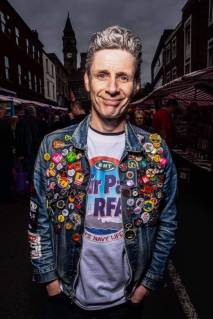