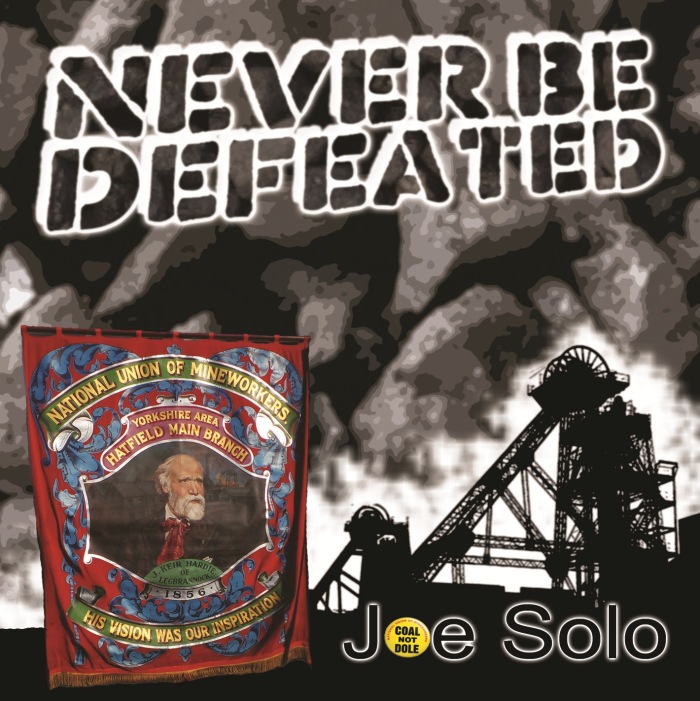 ‘Never Be Defeated’, my award-winning album of songs telling the stories of the lads and lasses of Stainforth and Dunscroft during the 1984-85 Miner’s Strike has all but sold out now, and from October 1st I need your help so here’s the heads-up.
Those of you who have followed me a while will know the annual songs under the name Joe Solo and The Hatfield Brigade raise funds for something called the DN7 Hardship Fund. This fund was set up by the Brigade to help people struggling to make ends meet in the former pit villages of South Yorkshire, and every year our songs put a few quid in there to help folks there around Christmas.
And this is where I need your help.
I’m looking to repress ‘Never Be Defeated’ to commemorate the 35th anniversary of the Miner’s Strike. It will include updated artwork by Kevin Pearson, and several bonus tracks including all three Hatfield Brigade songs, ‘Rattling Tins’ from my ‘The Future Needs Us Now’ CD, ‘Keep The Faith’ from ‘Not On Our Watch’ and ‘Never Forgotten & Never Forgiven’ from 2015’s ‘Left Turn On Liberty Lane’.
I’m looking to crowdfund the pressing, mastering and artwork costs, and here’s why.
I’m hoping every last penny from sales of this album can go to the Hardship Fund and go straight to helping others, rather than the first 200 sales covering my costs.
Effectively I want to hand these songs back to the amazing band of brothers and sisters in the Hatfield Brigade. Those songs are their stories, and I want them to benefit the local community from here on. To do that we need the financial independence of a crowdfund.
Details and links will follow in a couple of weeks, but please give it some thought and spare a few quid if you can.
Thanks folks x

One thought on “CROWDFUND APPEAL: Never Be Defeated”