Hard to know where to start, but suffice to say Glastonbury 2017 was 33 hours of the most incredible music, friendship and solidarity and I will remember it as long as I live.

Whether it was the company of my comrade and friend Tony ‘3Ts’ Wright; the truly amazing family that is the Leftfield Stage team; the soaring performances I witnessed; the electricity that crackled in the air as Jeremy Corbyn walked on stage; the new friends I made; the old friends who came along to the gig or sent messages of support from back home…..or maybe a combination of all of these, and more, I don’t know; but I loved every second and Leftfield is branded on my heart.

The gig itself was 90 minutes of pure joy as Billy Bragg, Louise Distras, myself and Oh Pep! sang in the round, and the staggering quality of the performances around me gave me such a lift I could hardly fail. Just beautiful. Such an inspiring set to have been a part of, and in an atmosphere unique to Leftfield, something approaching perfect. 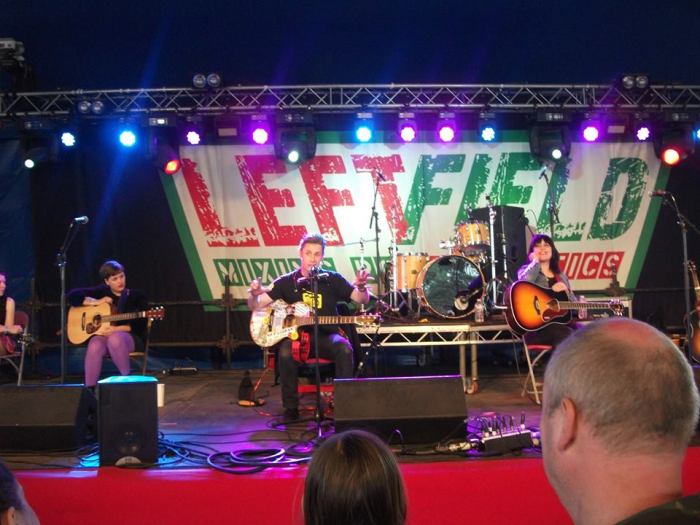 There were many highlights- trading songs with Paddy Nash, Diane Greer and Zoe West around the campfire on Saturday night; talking 7″ singles with Billy Bragg and Daniel Rachel on the Sunday morning (Note to self: Get ‘Tumbling Dice’ on vinyl and play the B-Side loud…..a Bragg recommendation); meeting John McDonnell backstage; becoming Rhoda Dakar‘s official ‘Sleeping Bag Roadie’; saying hello to Phill Jupitus PROPERLY instead of walking into him as I rushed offstage post- ‘Tom Paine’s Bones’ at The Adelphi in Hull two years ago and being so confused I lost my tongue……all of this was ace, but four moments stand out.

Firstly, Beans on Toast was absolutely incredible. Jay was on fire. I have never seen so much love and joy fly off the stage (literally toward the end) and come back at a performer a hundredfold. Beans was made for Glastonbury, and Glastonbury for Beans. A perfect match. 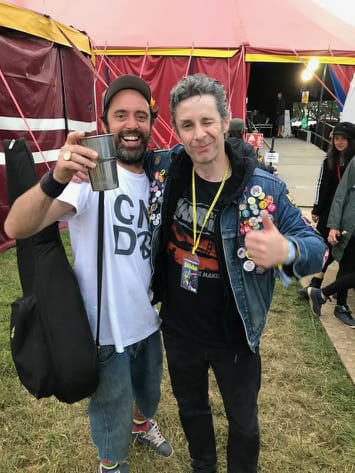 Secondly, the legend that is Ralph McTell, whose version of ‘Streets Of London’ was so moving there was hardly a dry eye in the house. He introduced it as having a new poignancy in the aftermath of Grenfell Tower, and it has. Absolutely stunning. Ralph’s voice, weathered to perfection by the years, delivered his masterpiece with an ache of longing that reinvented a now folk standard, and we were swept away by it. As it neared the conclusion and he had the audience sing the chorus, he paused to ask if only the ladies could sing. Any other song, and any other artist, and this would have been a cheesy slice of seaside showbiz, but at once the somewhat rowdy singalong morphed into a choir of angels, a fitting and deeply moving tribute to those who lost their lives just a few days ago. Incredible stuff.

Thirdly, the atmosphere in the Leftfield tent as, packed to the rafters, the crowd waited for Jeremy Corbyn. The air crackled with expectation and the Labour leader did not fail. He blew the roof off. The now trademark ‘Oh Jeremy Corbyn’ song rang out around Glastonbury whenever there was silence, and it is hard not so see him now as a Prime Minister in waiting, such is the love for the man. This would go to the head of someone younger, whose ego might run away with them, but Corbyn warns at every juncture that this movement, this tidal wave, is not about him it’s about US and what WE can bring- the ideas, the energy, the vitality- and of course, that just makes everyone love him more. Last year the result of the EU Referendum was announced at Leftfield and the atmosphere was darkened, stunned; so much has changed over the last few weeks that the most worn t-shirt was not a Radiohead, or a Foo Fighters, or an Ed Sheeran– it was Jeremy Corbyn. As Billy said, last year Leftfield was a corner of Glastonbury, this year Glastonbury WAS Leftfield. The times are indeed a-changin’. 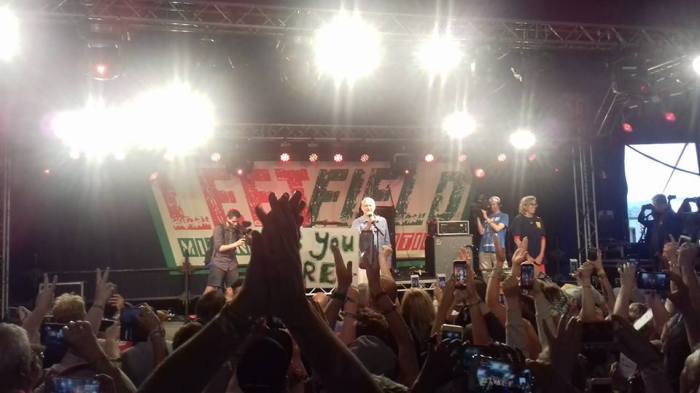 Lastly, a moment I will treasure forever. During our set, Louise, Oh Pep! and myself shared something very special as, after singing all weekend, poor Billy Bragg‘s voice finally gave up and he managed to gasp out the words…..”I wrote this 30 years ago, but you’re going to have to help me with it.”……and he began to play ‘A New England’. The audience sang it as Billy strummed. Every last word. Including the Kirsty MacColl verse.

As a fan you know how this stuff works. Artists do that kind of thing all the time and people join in; BUT when you are out in the crowd you hear the overall noise, yes, but it’s mostly the dozen or so people around you. On the stage it is different. Up there that crowd sounded like some kind of heavenly choir moving as one voice to help a brother over the line in the ultimate gesture of solidarity, love and respect. It was f***ing INCREDIBLE. All I could do was soak it up and watch Billy‘s face, a mixture of pride, mischief and love reciprocated.
I will remember it for the rest of my life.

So that was my Glastonbury. I loved it. Every last second. And I cannot thank everyone who got me there enough, from Tony and Billy, to Sarah and the Leftfield Team; to Grant and everyone on sound and security; to Paul and Catherine for sending sugar and caffeine backstage; to Vicky and Craig and Colin and Angela and Lisa and all my other Facebook friends who came along to the gig when there was so much going on around the site; and to all of those at home who sent messages of good will which almost set my phone alight on Sunday. You all rule. 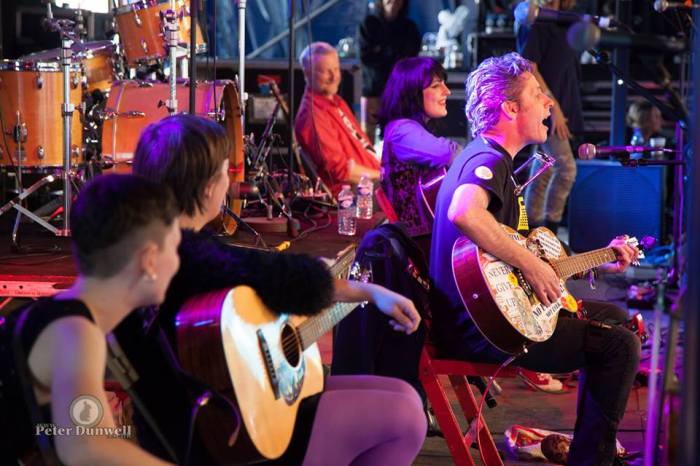 I have no management, no agent, no record company, no PR guru…..none of the machinery that gets people places in the music industry. When I get to play a gig like this it is because of the amazing people who speak up on my behalf, who share and who comment and who turn up at gigs on wet winter Wednesdays and then tell all their friends. In short, I was on that stage because you lot lifted me up there and I will never forget that.