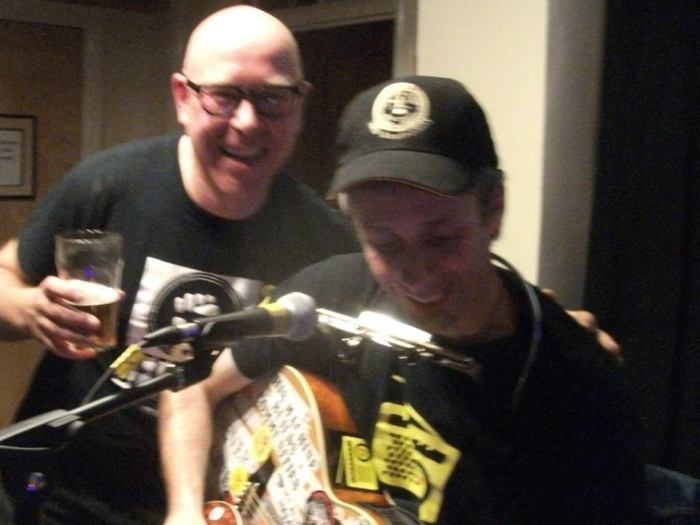 What an incredible weekend!

Saturday night I performed the ‘NEVER BE DEFEATED‘ album at Glossop Labour Club as part of Matt Hill’s DEFIANCE SESSIONS and loved every second. Joined by Rebekah Findlay on fiddle and vocals, and debuting ‘Archie’s Song’ a brand new track to support the Miner’s Pension Campaign, the night doubled as both a WE SHALL OVERCOME event and a celebration of Jeremy Corbyn’s victory in the Labour leadership election that afternoon. We had a double celebration as Mr Corbyn had sported a WE SHALL OVERCOME badge on his jacket for the afternoon, giving our organisers up and down the land a huge lift. In fact, Matt’s cheeky poster advertising WSO badges under the tagline ‘AS WORN BY JEREMY CORBYN’ worked wonders and the merch raised an extra £60 for our causes! An amazing end to an amazing day.

On Sunday I performed the ‘NO PASARAN!‘ album at a very special event at St. Mary’s Church on Lowgate in Hull supporting the local International Brigades Memorial Group in their quest to fund a brand new outdoor memorial to the memory of the ‘Hull 8’ who travelled to Spain to fight fascism between 1936 and 1938. Four of these men never made it home, including Jack Atkinson whose story inspired the album, and it will be an emotional day indeed when we finally get to unveil it. Their story should be local legend and inspire new generations of anti-fascists to raise their voices against the worst of humanity.

The night was incredible. Support came from Na Mara who were superb, and the pews were packed despite the Autumn temperatures inside the church. Again I loved every second and a MASSIVE thank you must go to Joe Francis, Gary Hammond and the rest of the Hull IBMG for fighting this cause. And it was moving beyond belief to play to relatives of the volunteers, especially Jack’s family and the loved ones of my other fallen comrade, Giles Stevens.

All told, two events I was immensely proud to play a part in. Particularly moved by Joe Francis’ words:

“Joe Solo, our own anti -fascist punk folk singer songwriter did us proud. He never fails to move the crowd and did it again tonight. He is the embodiment of our movement and what it stands for. The way he makes the hairs on the back of your neck stand on end when he sings about the boys from Hull, culminating in the now classic ‘No Pasarán!’ Made fists thrust in the air with a defiant pride in the sacrifice our Hull boys made.”

Next stop Liverpool tomorrow for the Miner’s Pension Campaign Rally.

Then it’s We Shall Overcome……..