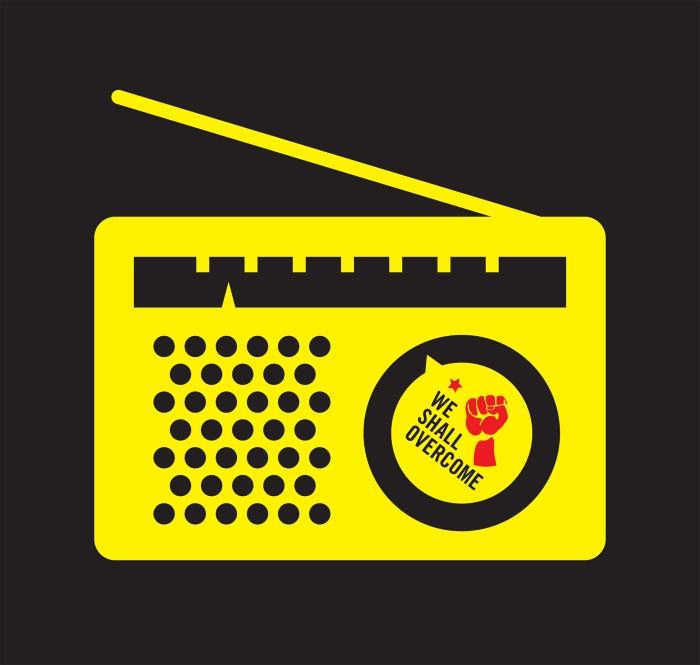 Last night I gave a speech on We Shall Overcome and the politics it was born into at the Corporation Club in Scarborough as part of an event called ‘Corbyn’s Crucible’.

Here’s a draft of my notes:

“For most of my life politics has been something inflicted on us by people with money and power and influence, and we haven’t engaged with it beyond the daily grumbles and a five yearly visit to the ballot box to put a cross next to a name hoping that things might change for the better but knowing in our heart of hearts the opposite would be true. Occasionally the government would change, but little else did. The policies were designed to never startle, tailor made for the few thousand floating voters in marginal constituencies who statistically decide the outcome of elections. Trouble is, floating voters by their very nature are people with no political conviction at all so if you tailor your manifesto to suit people with no political conviction at all you end up looking like a PARTY with no political conviction at all. The other side of that is that you effectively disenfranchise entire swathes of the population who no longer hear their views, their hopes and their ideas given voice in the corridors of power. This leads to the feeling of powerlessness which in turn becomes apathy and alienation, the twin beasts which serve neither our communities, nor the political process itself.

People on the Right were well served, they had the Tories and Farage and Murdoch feeding their bile with a new scapegoat every morning. They were fine. They had their politicians. We on the Left had nothing. We voted Labour holding our nose, not because their policies were what we wanted, but because they weren’t the Tories. We weren’t voting FOR something, we were voting against something else. That made a negative of the whole process.

What we noticed when we started We Shall Overcome was the eagerness, the energy that immediately sprung up around it. These were the days before Mr Corbyn when there was still a vacuum waiting to be filled. When he came along it didn’t surprise us that he got the reaction he did, we knew that feeling was out there. It was electric.

Don’t get me wrong. No politician has a magic wand. There’s no-one who can change society at the flick of a wrist with an incantation or a few magic words. Politicians can change the tone of the debate, but it is up to US to change society. We all have our part to play in that.

I have been a singer now for almost 30 years, and in all that time- though the quality of the medium by which it was conveyed has been decidedly variable- my message has pretty much remained the same- it is not enough to sit around complaining that the world is a cold, cruel and uncaring place without lifting a finger to change that, the way you fight against an uncaring world is to CARE. Not to care quietly in a corner all by yourself, but to CARE OUT LOUD; because maybe, just maybe others will follow your lead and communities and society will change as a result. When this happens, when our ambitions for a more caring and compassionate society are met by politicians willing to implement policies to facilitate that quest, that is when we change the country. Like I say, it is up to us- to lead by example, to inspire.

We Shall Overcome was born into a world a far cry from this one. May 8th 2015. The Tories were celebrating an election victory and the rest of us were staring down the barrel of five more years of austerity, five more years of cuts, five more years of the poorest and most vulnerable in our society paying for the mistakes of the rich. Being a Facebook addict I was online most of the day watching the recrimination and blame, the gloating, the arguments, the claims and counter-claims. It was depressing. I’m not a negative person, I started posting positive messages, ‘come on, we have to pick ourselves up and dust ourselves down and fight back! We have to change society!’ One of my friends, Ste Goodall commented on one of my threads:

“What we need is a night al over the country of musical protest. Let’s pick a date.”

Now Ste and myself had been involved with food bank benefits for a couple of years prior to that so I said let’s combine the two, and We Shall Overcome was born.

We basically just tagged as many left-leaning musicians, organisers, promoter and activists we knew and asked them to join in. We thought we’d get maybe 10 or 15 gigs together and make a night of it, but it snowballed beyond our wildest dreams. By the time we got to our night it was a weekend, and it wasn’t 10-15 gigs but 250 of them in 123 different towns and cities across 8 countries on 3 continents, and between them we managed to raise an estimated £125,000 worth of food, cash, clothing and bedding for those hardest hit by austerity.

And we’re back. This year we run from 1st to 9th October and we’d love you to support the events and spread the word. This is what I mean by caring out loud.

I think We Shall Overcome is best embodied by a lady called Pauline Town who runs The Station pub in Ashton-under-Lyne. Every night Pauline goes out and makes sure the homeless have a hot drink and a meal; and every day she works tirelessly to find them accomodation or to reunite them with estranged family. She is an amazing woman. Her motto is this, if I have to save the world one life at a time then that’s what I will do. We can ALL learn something from that. For too long politics has been about numbers, it’s time we gave those numbers back their names.

The lesson we can learn from WSO is much the same as that we can learn from the sea change in British politics that Mr Corbyn represents. People will not lift a finger for despair, but they will march a million miles for hope.

It won’t be easy, but we need to fight this fight and with hope, compassion, solidarity and togetherness we can win it.