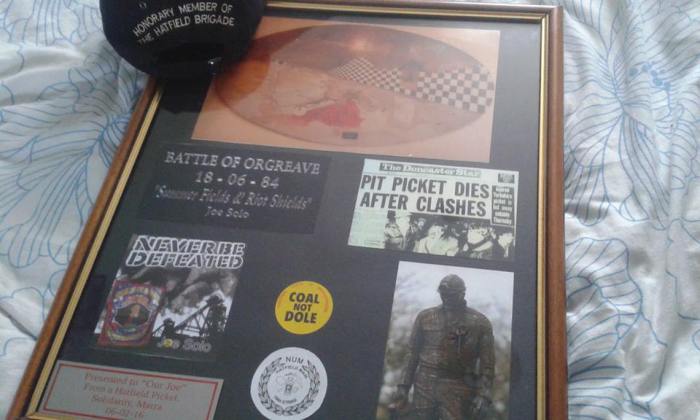 Still trying to take it all in. Stainforth Pit Club last night was just electric. Managed to keep it together during the gig, but on the drive home there was something wrong with the air inside the car because I kept getting sand in my eyes. I’ll have to have that looked at….

Massive thanks to Lee Huck​ for doing the sound and to the amazing Rebekah Findlay​ for a stunning performance. There was so much sniffling and wiping away of that dratted sand (it was EVERYWHERE) that I daren’t look up while she was singing!

Massive thanks too to all of those who travelled from as far and wide as Liverpool, Scunthorpe, Darlington, Barnsley, Sheffield, and, in the case of Bob Crow’s cousin Dave, London; incredible support from you all, and so great to have you there.

Biggest thanks of all though must go to the Hatfield Brigade themselves. Out in force and supporting every last note, I am proud and privileged to call them comrades and friends. Before I went on stage I was presented with this amazing plaque by ‘Little’ Harry Harle​. As if I wasn’t having enough trouble controlling my bottom lip. The caption reads:

It will be treasured always.

I spoke last night about this through the mic, but it is worth repeating. Those lads and lasses weren’t defeated in 1985. If they’d been defeated I would not have been sat there 31 years later singing those songs. They fought against overwhelming odds with the full force of the State against them, on the front line against The Cuts (for Guardian readers, yes, that is a potential ‘Lost Consonant’) before the rest of us even knew there was one. A full year without wages fighting to save jobs, communities and the future of their children and their children’s children. THAT is an example to EVERYONE. For me they will pass into folklore and be revered like the Tolpuddle Martyrs, the Suffragettes, the Hunger Marchers, the volunteers for the International Brigades; they gave up so much for so long and deserved better, and I for one will NEVER FORGET.

I looked out on a room full of heroes and saw a fight still burning in a community forever bound by the ties of comradeship and loyalty only a mining town can build. I saw people who would join the Junior Doctors on their picket next Wednesday; I saw people fighting to have the Hatfield Main headgear preserved as a national monument to their industry; I saw Kerry Hughes​, the proud miner’s daughter of a proud miner’s son collecting food for her new DN7 food bank because they know what it means to go without and won’t let that happen to anyone else if they can help it.

Good people. The BEST of people.